Cision Launches The 2020 State of the Election, A New Series Analyzing Media Coverage of the U.S. Presidential Election
The weekly blog series from Cision will provide nonpartisan media analyses leading up to Election Day

CHICAGO, Sept. 2, 2020 /PRNewswire/ -- Today, Cision, the global leader in earned media software and wire distribution services, announced that for the next ten weeks they will track and analyze media coverage of the U.S. presidential election. The findings will be published each week on Cision's blog in a new series, The State of the Election. Readers can expect nonpartisan, data-first insights to understand how the public is consuming and engaging with election coverage before, during and after the campaign. 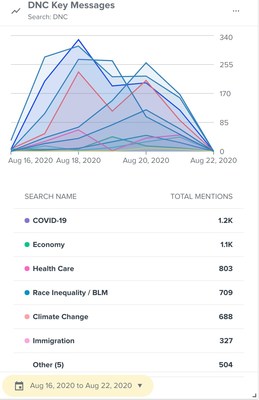 To learn more about Cision and to view the full media analysis click here.

"Cision's powerful media monitoring and analytics platform gives a unique perspective into how the election is being covered," said Seth Gilpin, Product Marketing Manager at Cision.

"Thousands of stories are being published every day, which reach millions of voters across traditional, digital, and social media channels. By tracking the evolution of election coverage, we can analyze a variety of topics and provide a data-driven view of how earned media impacts audience behavior."

Cision launched the series today, beginning with a media analysis of the 2020 Democratic and Republican National Conventions. Through a comparative lens, Cision looked at earned media coverage for both the DNC and RNC, which attracted approximately 20 million viewers each night. The eight days of combined programming sparked thousands of news articles, reaching millions more.

The data revealed that the RNC generated 1,000 more articles than the DNC from August 16th to August 29th. Compared to the 2016 conventions, the earned media coverage of the RNC increased by 15.6%, whereas DNC coverage decreased by 61%.

However, Cision's proprietary Article Impact score, which is a blended metric that balances the readership, social amplification, and sentiment of an article, paints a positive picture for the DNC. Despite having only 28% of the total share-of-voice, 80% of the top DNC and RNC related content was published by left-leaning publications.

Other key findings include:

In addition to media insights, Cision will provide recommendations for how brands can use media monitoring to determine if they should participate in conversations around the election, along with which platforms will be most effective if they decide to do so.

Additional topics that will be covered in The State of the Election series include:

To learn more about Cision and to view the full analysis click here.

Cision is politically unaffiliated and does not endorse any political parties, platforms, campaigns or candidates.

About Cision
Cision is a leading global provider of earned media software and wire distribution services to public relations and marketing communications professionals. Cision's software allows users to identify key influencers, craft and distribute strategic content, and measure meaningful impact. Cision has over 4,800 employees with offices in 24 countries throughout the Americas, EMEA, and APAC. For more information about Cision's award-winning products and services, including the Cision Communications Cloud®, visit www.cision.com and follow Cision on Twitter @Cision.